Excitement is growing as the City of Burlington and the New Leaf Society partner together to remake Willowbrook Park into Willowbrook Arboretum!

Follow links below for more information on the transformation of this park!


After a COVID-related delivery deal, the roof trusses have been raised on the Arboretum Commons building.

Crews were planting another fifteen trees donated by New Leaf Society, including this Magnolia situated near the bridge at the foot of Central Ave.

Another Magnolia caught a ride down East Willowbrook. It will be planted across the path from the magnolia above.

The Arboretum's Horticultural Specialist Jason Barnhill makes sure all the newly-planted trees, including this Beech, are good and watered. People donated this particular batch of trees through New Leaf Society in the memory of loved ones.

Speaking of New Leaf Society, their Event and Fundraising Committee held a socially-distanced meeting in the fresh air.

Two young fellas were checking out the tadpoles.

Another little fella sniffed nearly every square inch of the park.

The plantings that were part of the 2018-2019 Stream Restoration project are starting to spring back to life. Several more of the native trees (oaks, bald cyprus, swamp magnolia, etc) were recently planted along the stream bed as part of the original contract, replacing trees that didn't survive.

The various species of reed-like juncus that were seeded along the creek as part of the restoration have really flourished. You can see a bank of them here with one of the beautiful Corten steel bridges donate by New Leaf Society in the background.

Jason Barnhill, the Arboretum's Horticulture Specialist, has been getting busy, too. Though many of the specialized plantings will have to wait until construction is complete, Jason and his crew did replace the plantings around the gazebo.

They planted Distytlium 'Vintage Jade' and Cephalotaxus 'Duke Gardens.' These low-growing evergreens will allow for an unobstructed view of the park from the Gazebo. When they fill in they will beautifully frame the two existing Japanese Maples.

From being in the park everyday, Jason is quickly become acquainted with all the animals who enjoy Willowbrook. When some park-goers found a baby Yellow-Bellied slider turtle confused and dehydrated on one of the paths, they brought him to Jason. After making sure the little guy was healthy and hydrated, the turtle was released back into the creek.

A big hello and welcome to the City’s new hire, Horticultural Specialist Jason Barnhill. Jason’s primary focus will be to oversee and maintain all the plantings in the Arboretum. While most of the plantings will wait until construction is completed on the pathways and the Arboretum commons, Jason is already starting some minor projects out of the way of construction traffic. 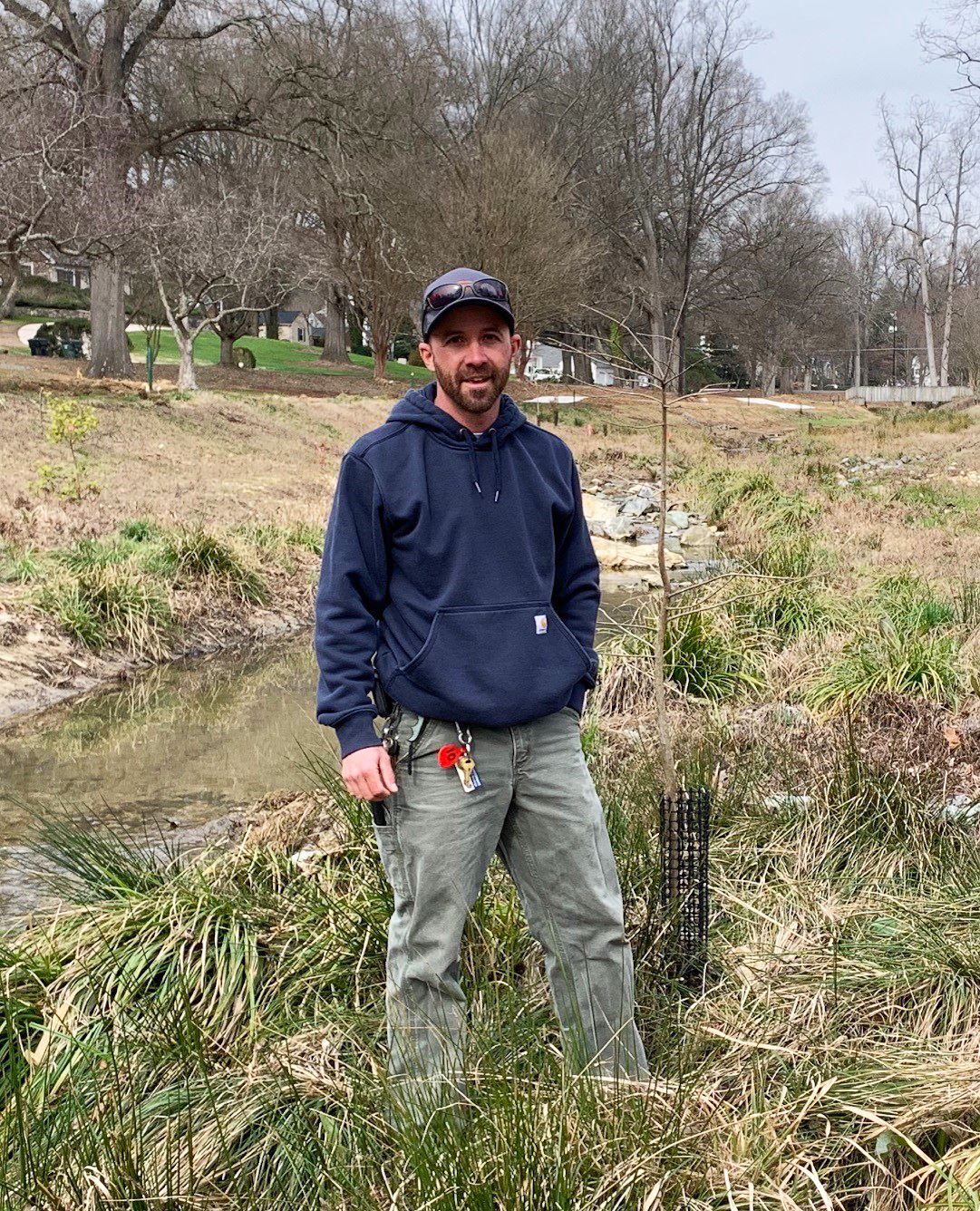 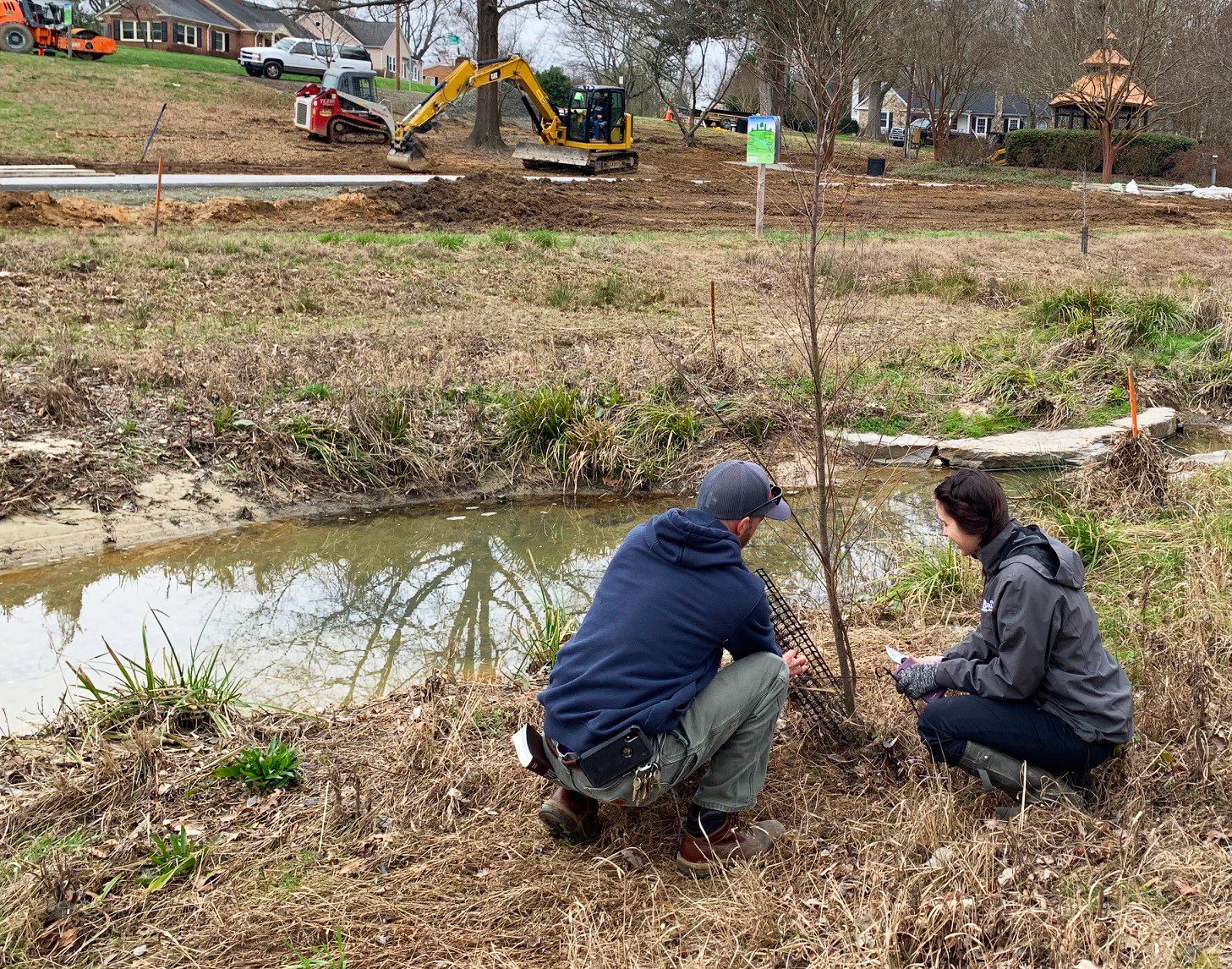 Jason gave some pruning lessons to the City’s Stormwater Manager, Amy Cameron. Amy deals with riparian buffer rules and regulations and has been very involved with the stream restoration in the park. Amy showed Jason some of the native sedges and rushes that were seeded in the challenging, rain-drenched 2018-2019 season that now have really begun to get established. Jason taught Amy to prune one of the river birches also planted during the stream restoration. As the trees planted in the riparian buffer grow, they will be trimmed up to provide a clear sight line. Eventually, the trees will have roughly six feet of bare trunk and people will be able to see across and down into the creek fairly clearly in most places. 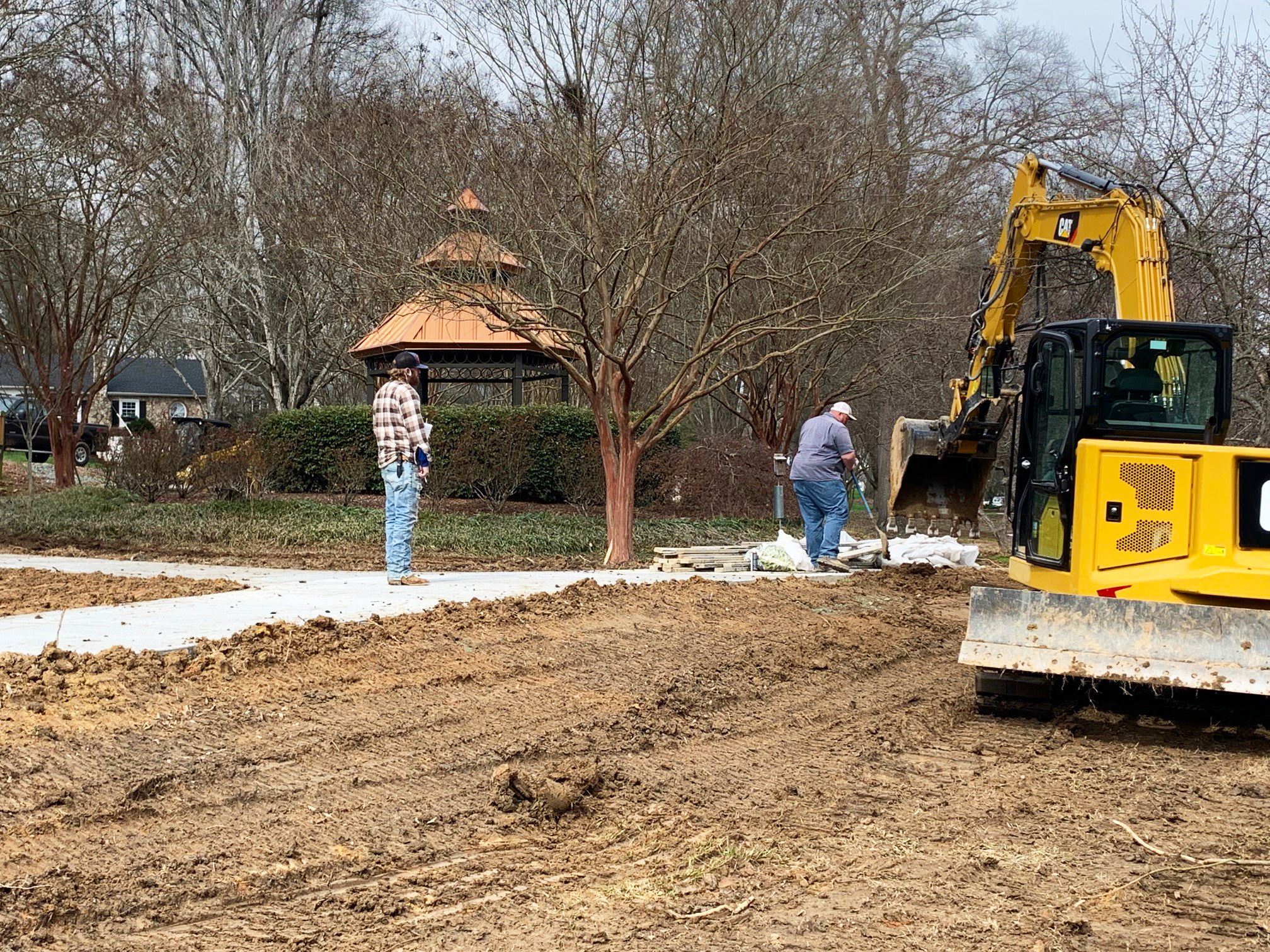 Construction on the pathways has made it to the gazebo! 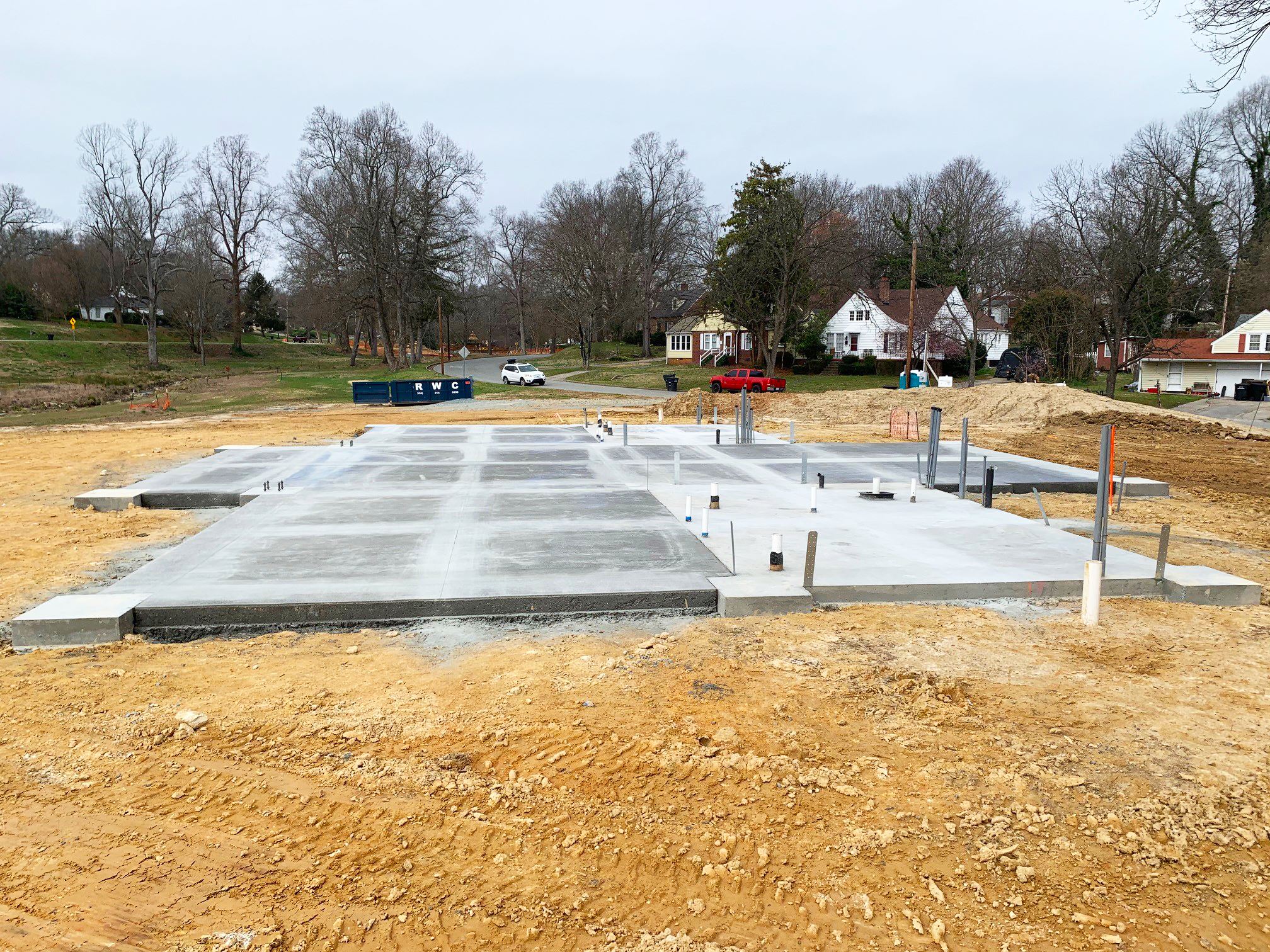 And the concrete has set for the Arboretum Commons Building.

Construction is moving along for the Burlington Arboretum. The pathways are being graded and paved, the wooden bridge was placed last week, and crews are preparing to break ground for the construction of the Arboretum Commons Building. 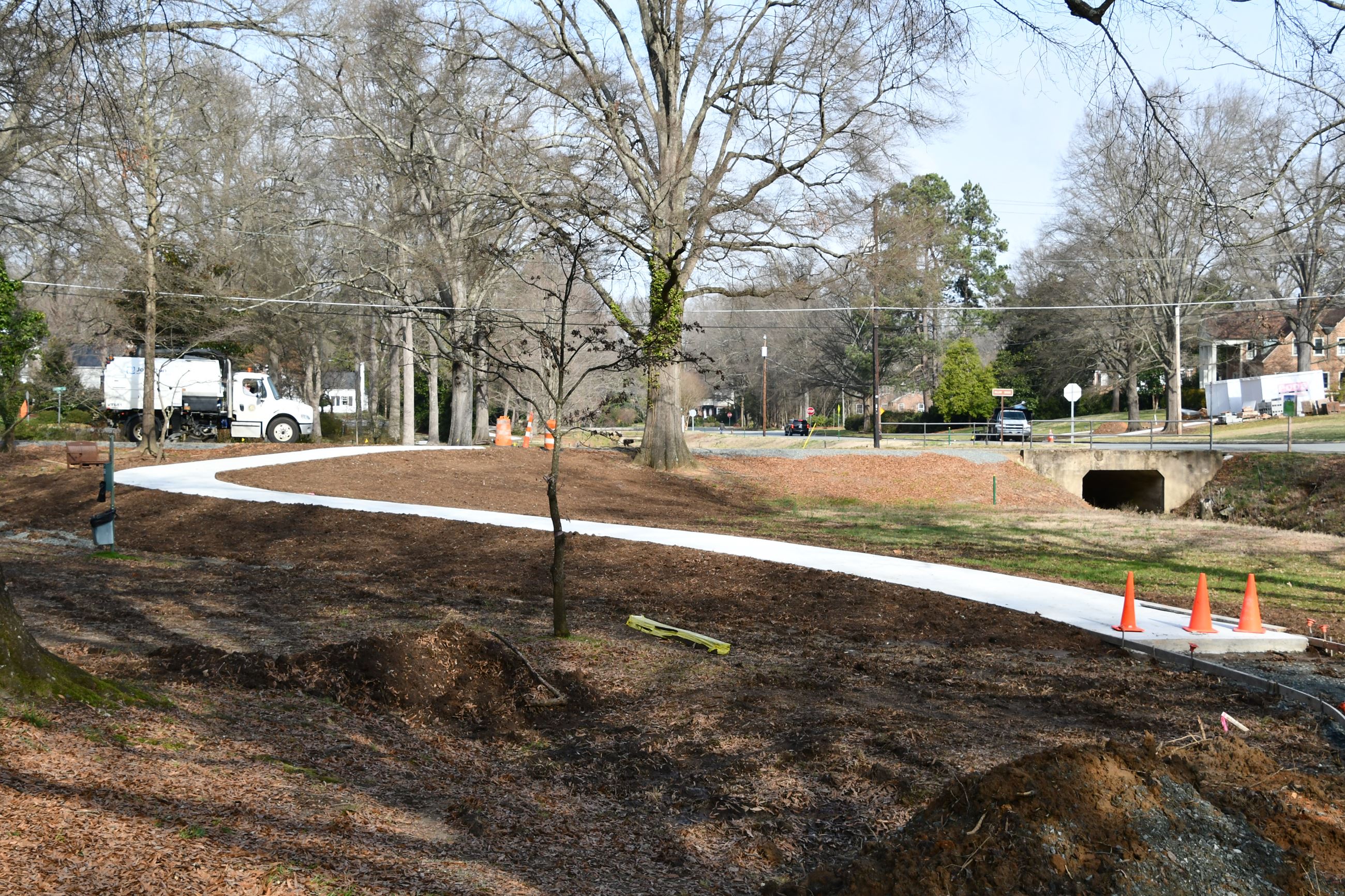 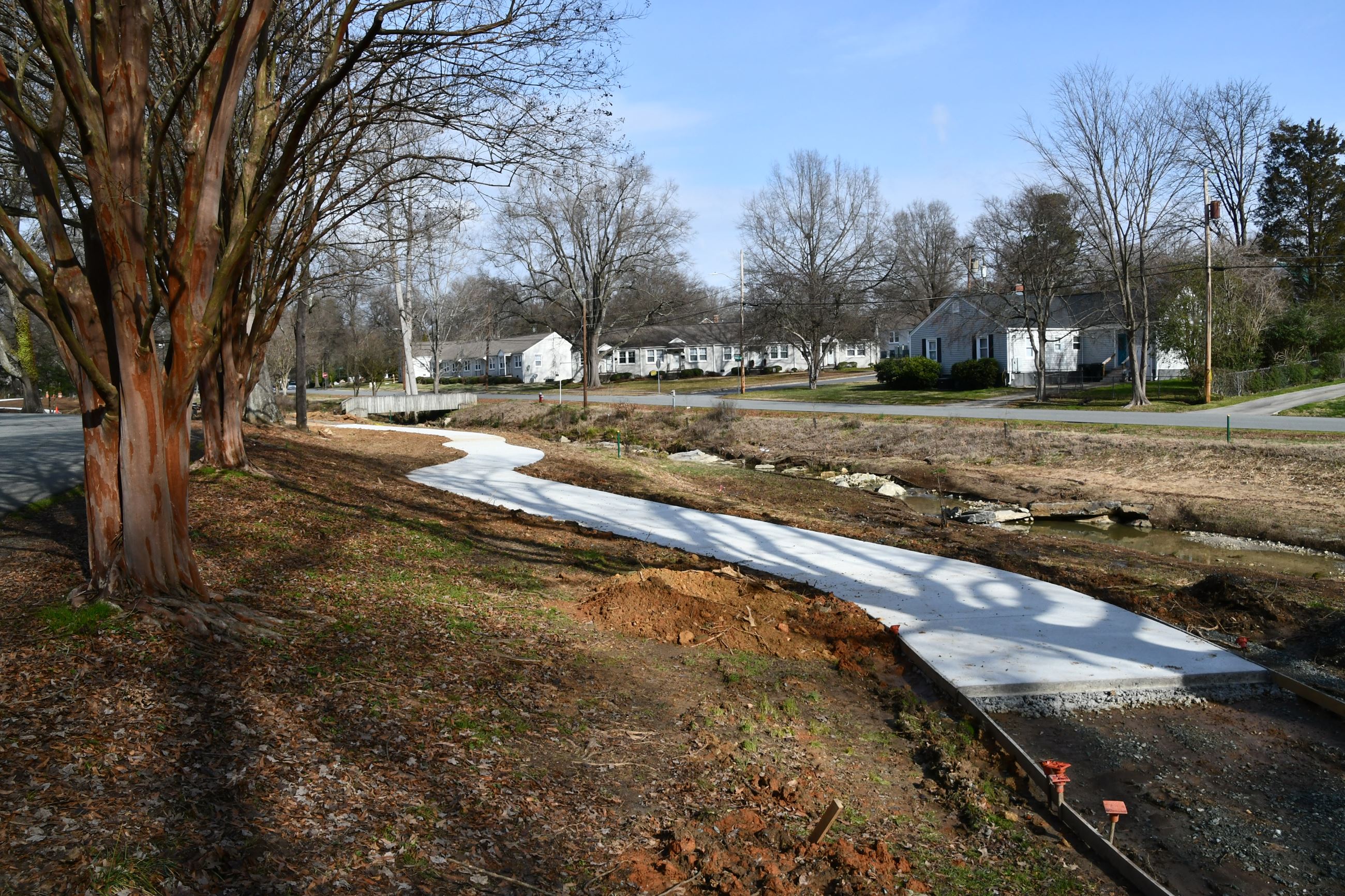 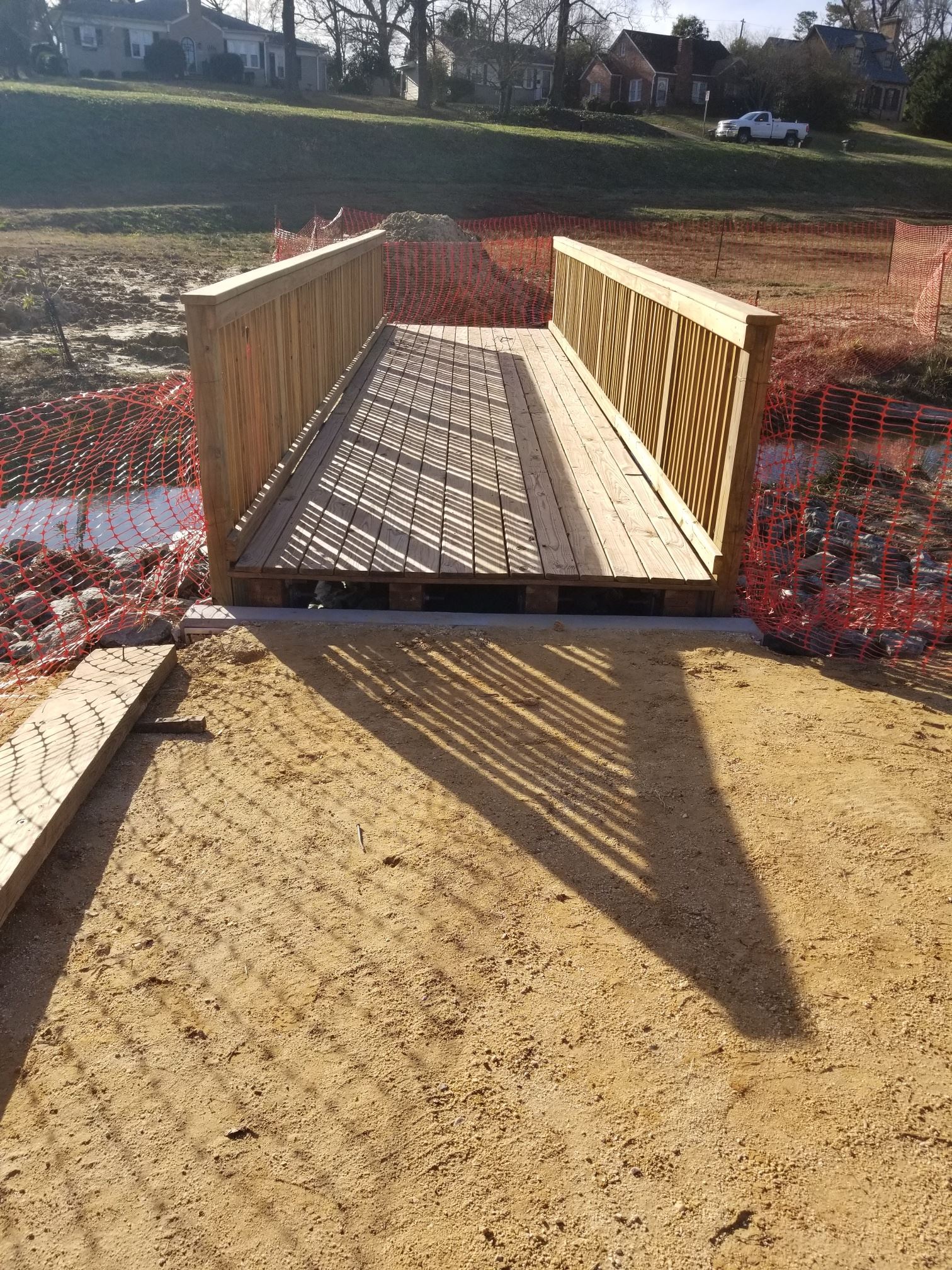 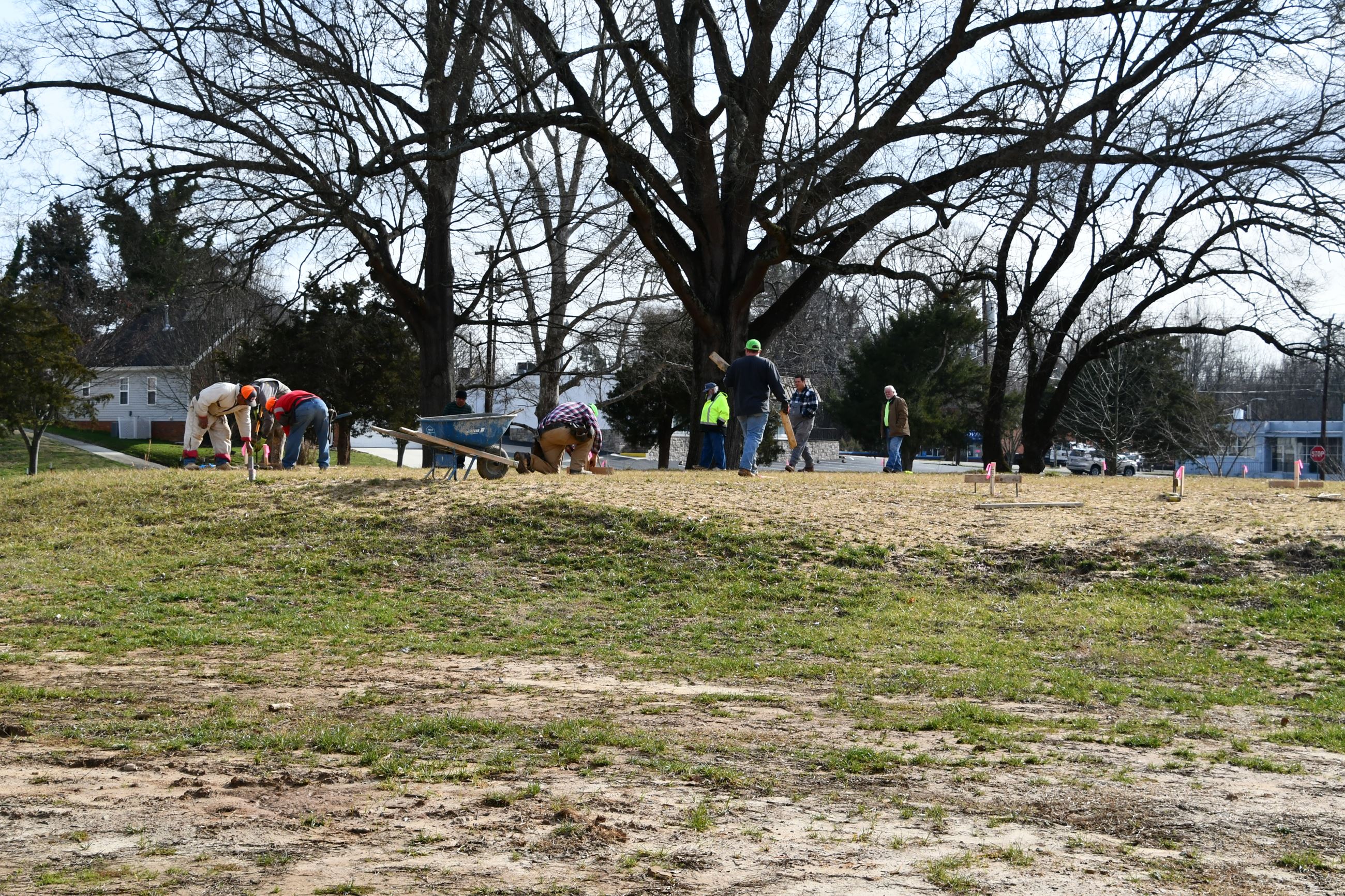 Two Bridges have been placed in the park and pathways are still being laid. 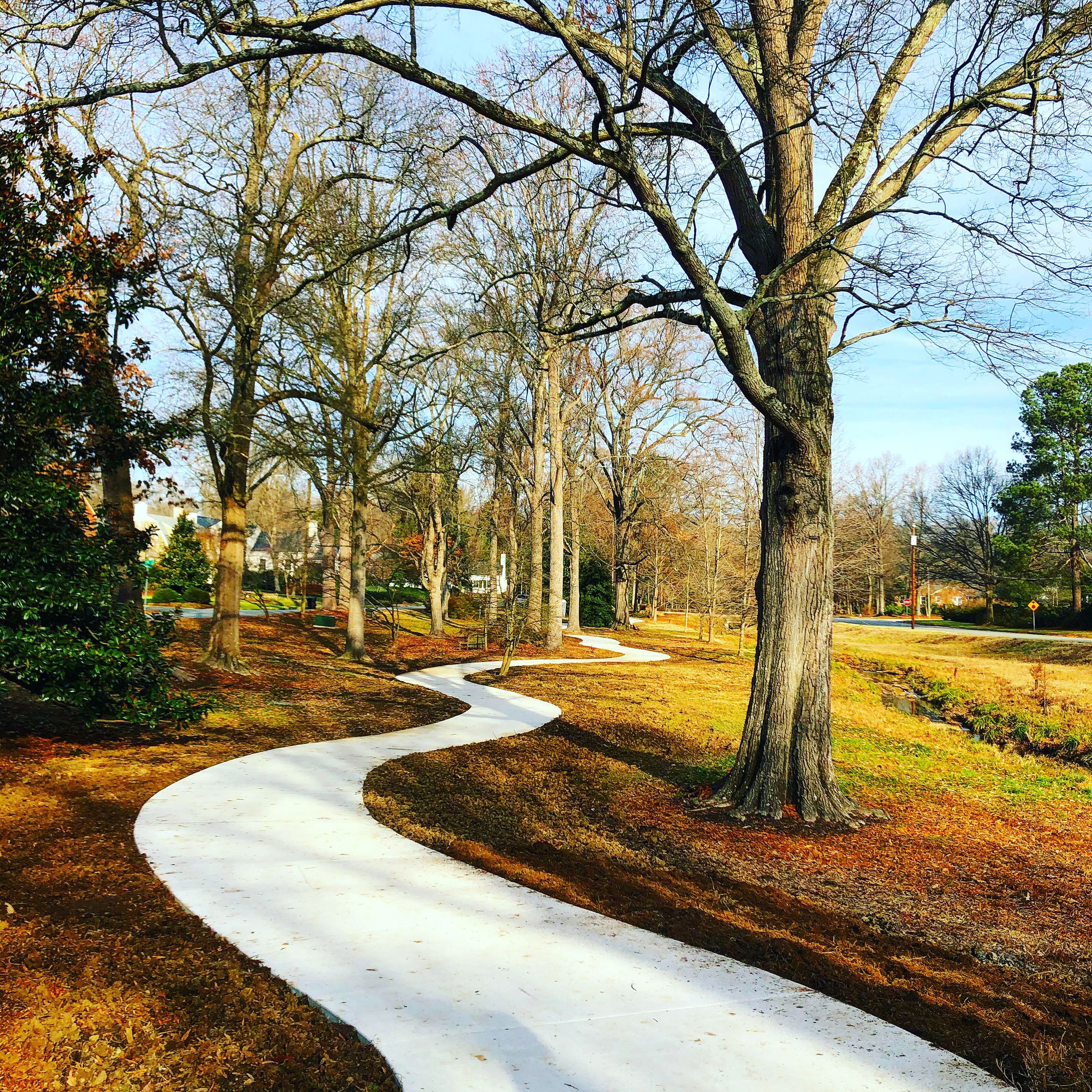 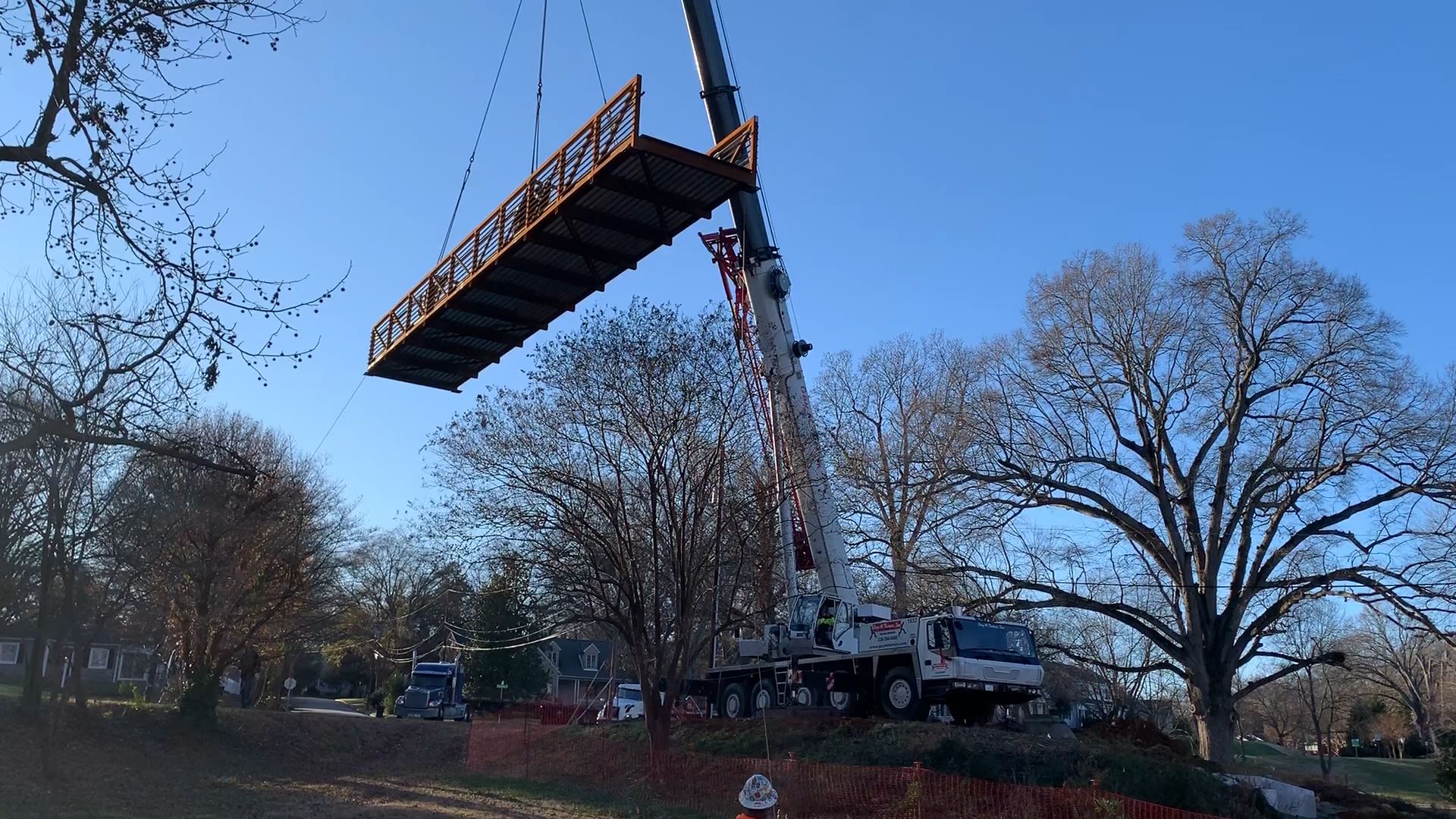 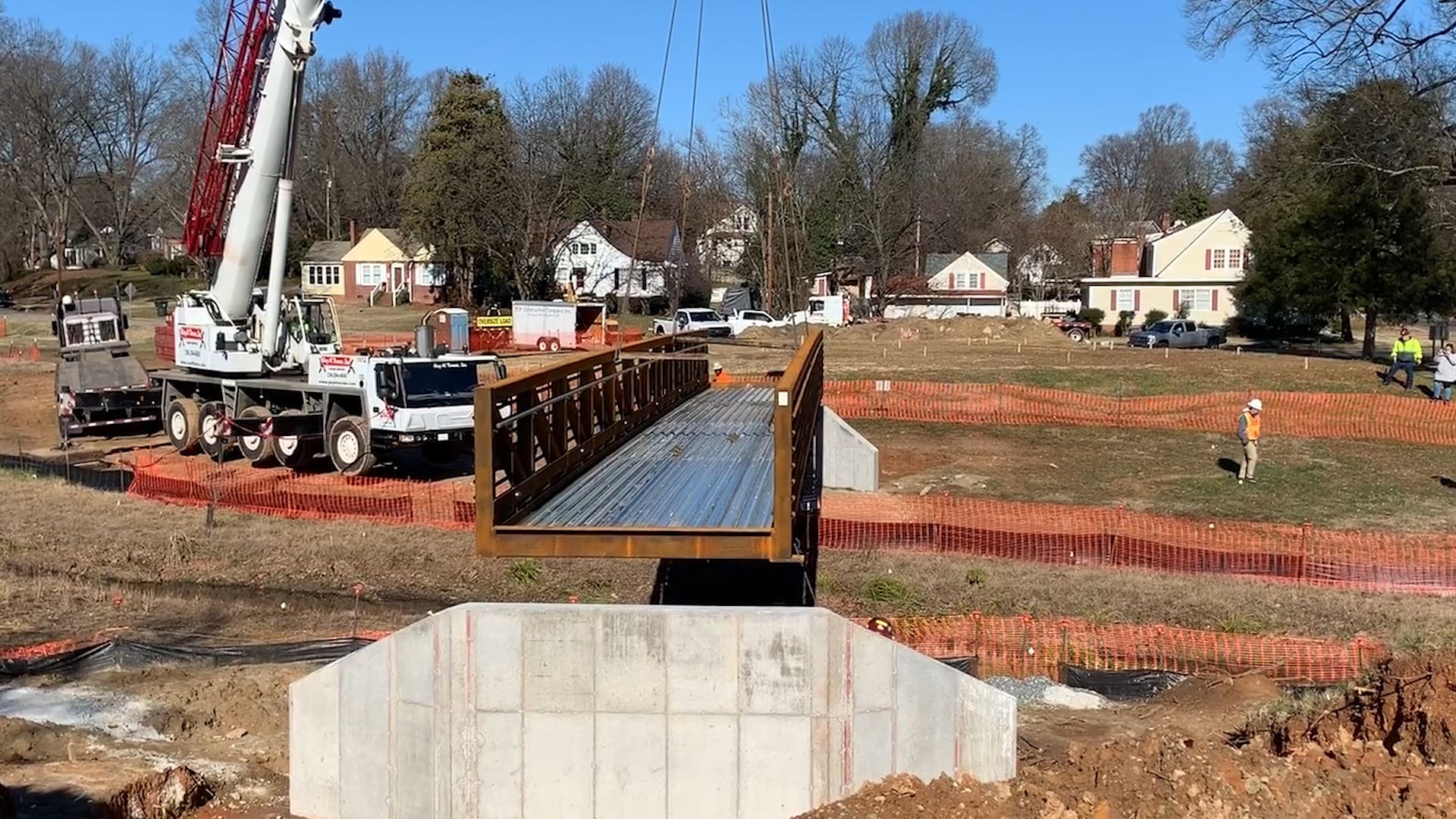 There’s a lot going on in Willowbrook Park right now. Crews are making progress on the bridge abutment closest to Church St. Eventually it will lead from the Arboretum Commons Building on the East Willowbrook side across Brown Branch Creek to the Veterans Overlook Plaza. 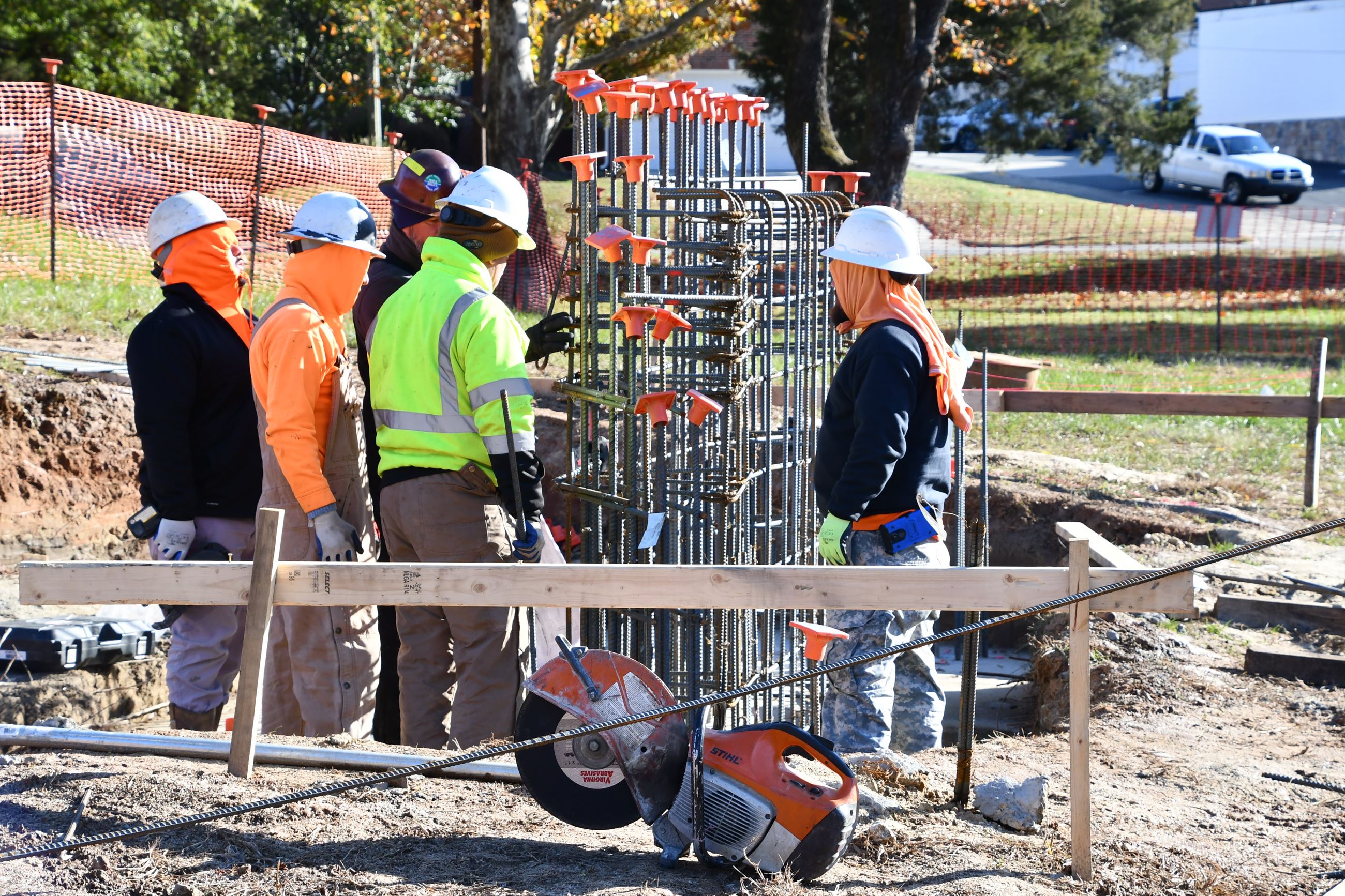 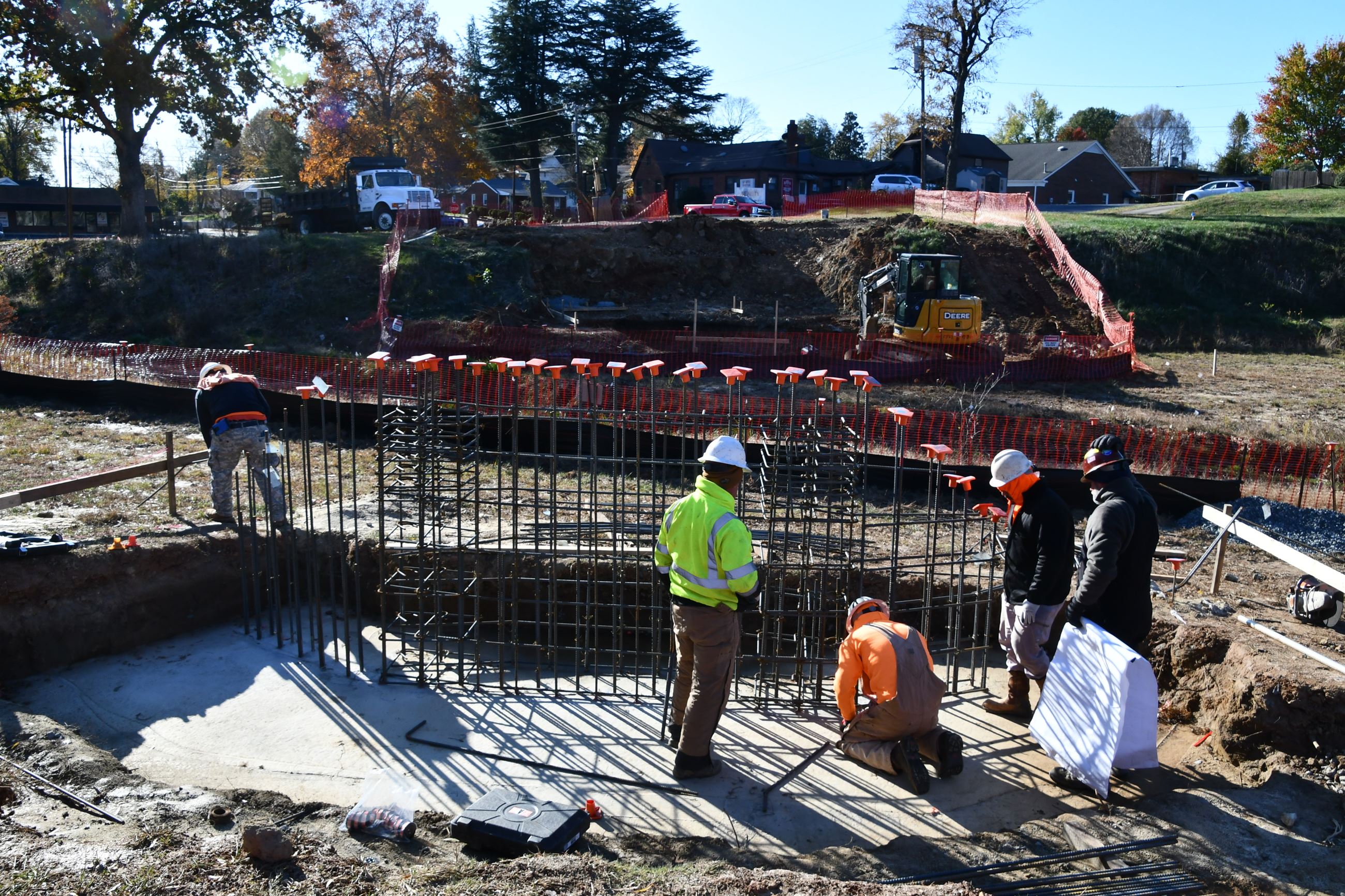 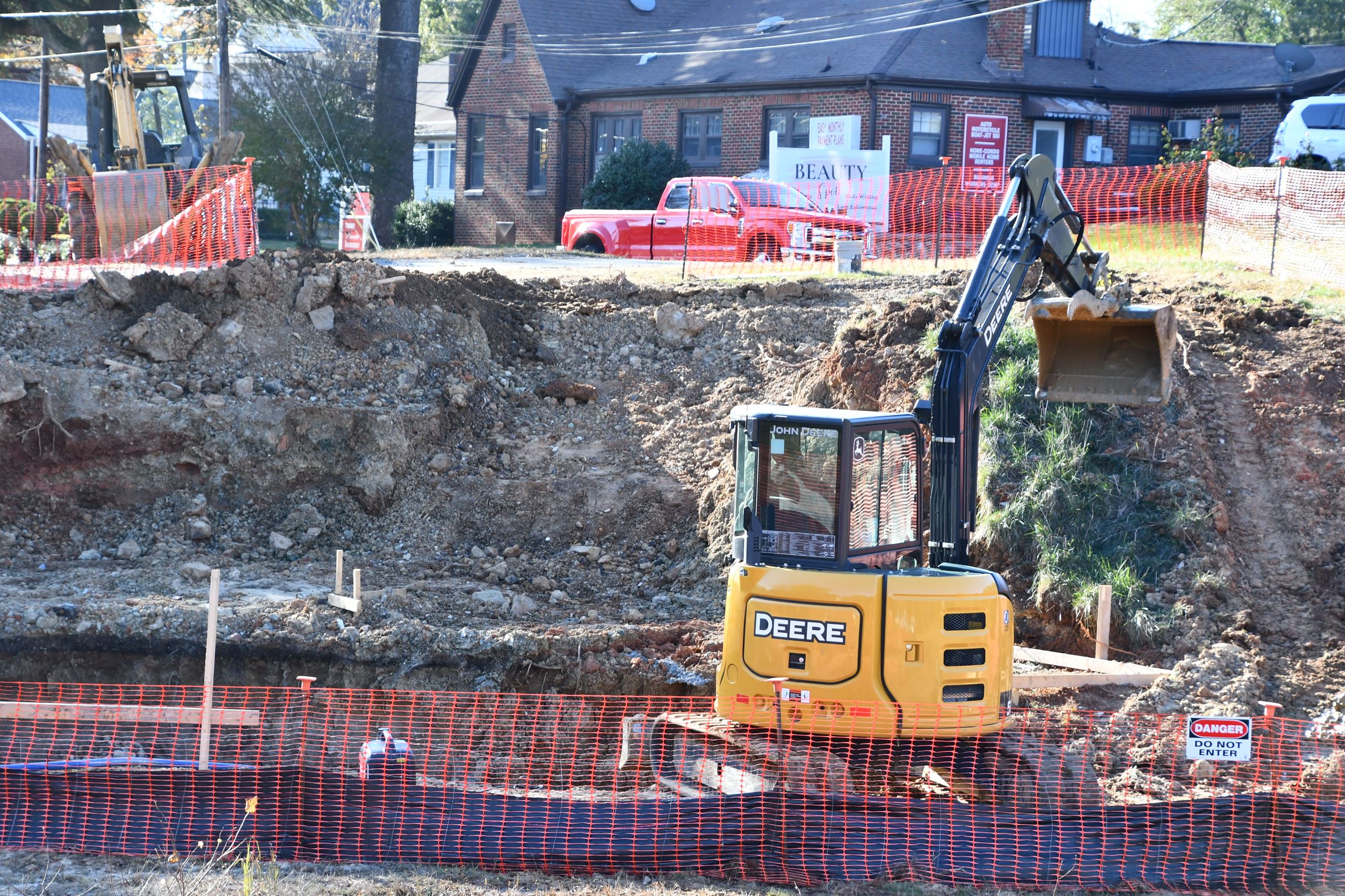 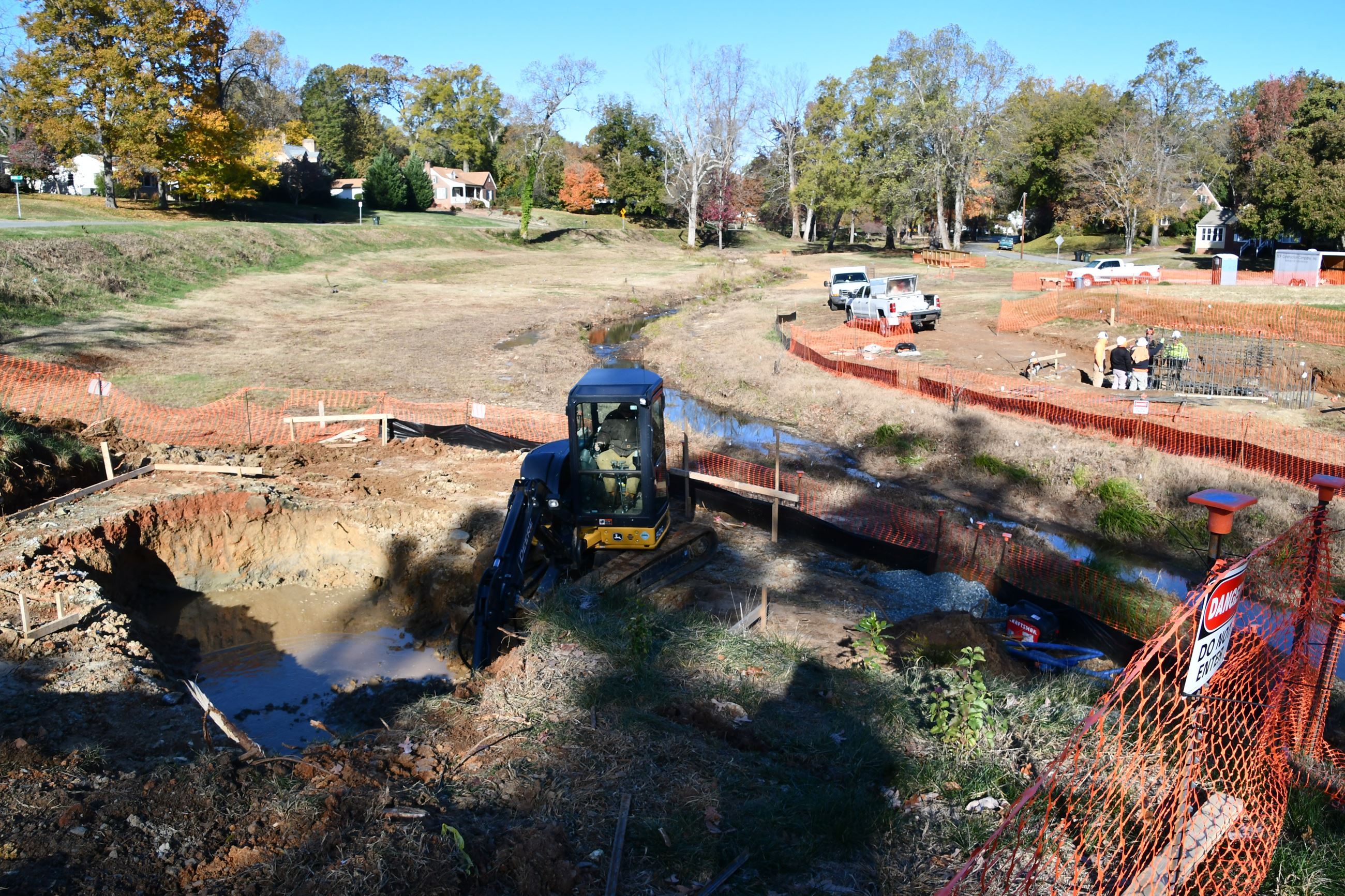 Repair work to the stream restoration efforts are complete. Burlap netting has been laid in problem areas all along the park. These areas have also been reseeded. 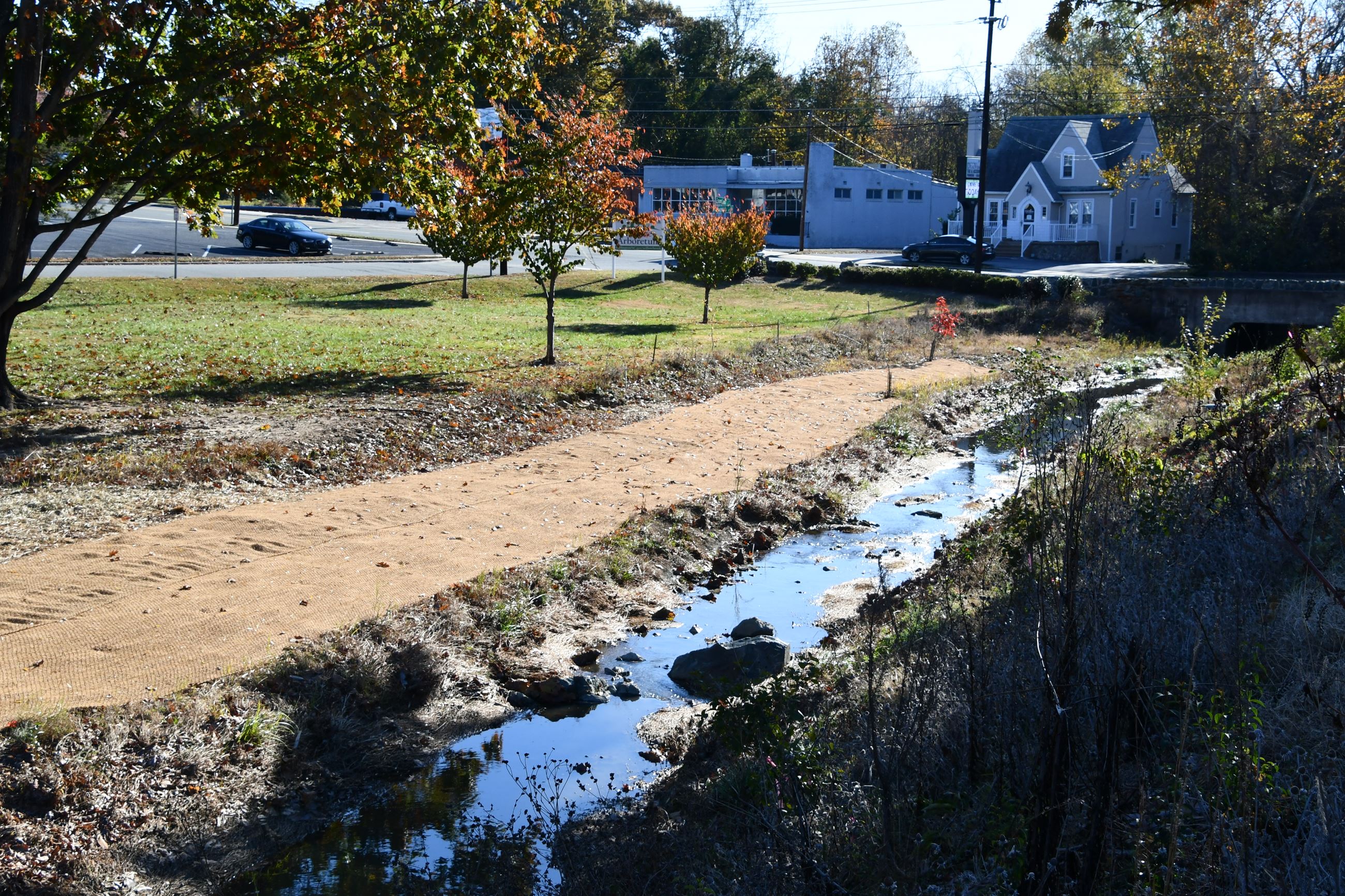 Construction has also begun on the park walkways. Crews have started grading a curving path from Front St. to West Davis St.  This week’s rains will cause a day or two delay on that section, but they’ll soon be back in action building paths starting at Front St. and working their way down to Church St. 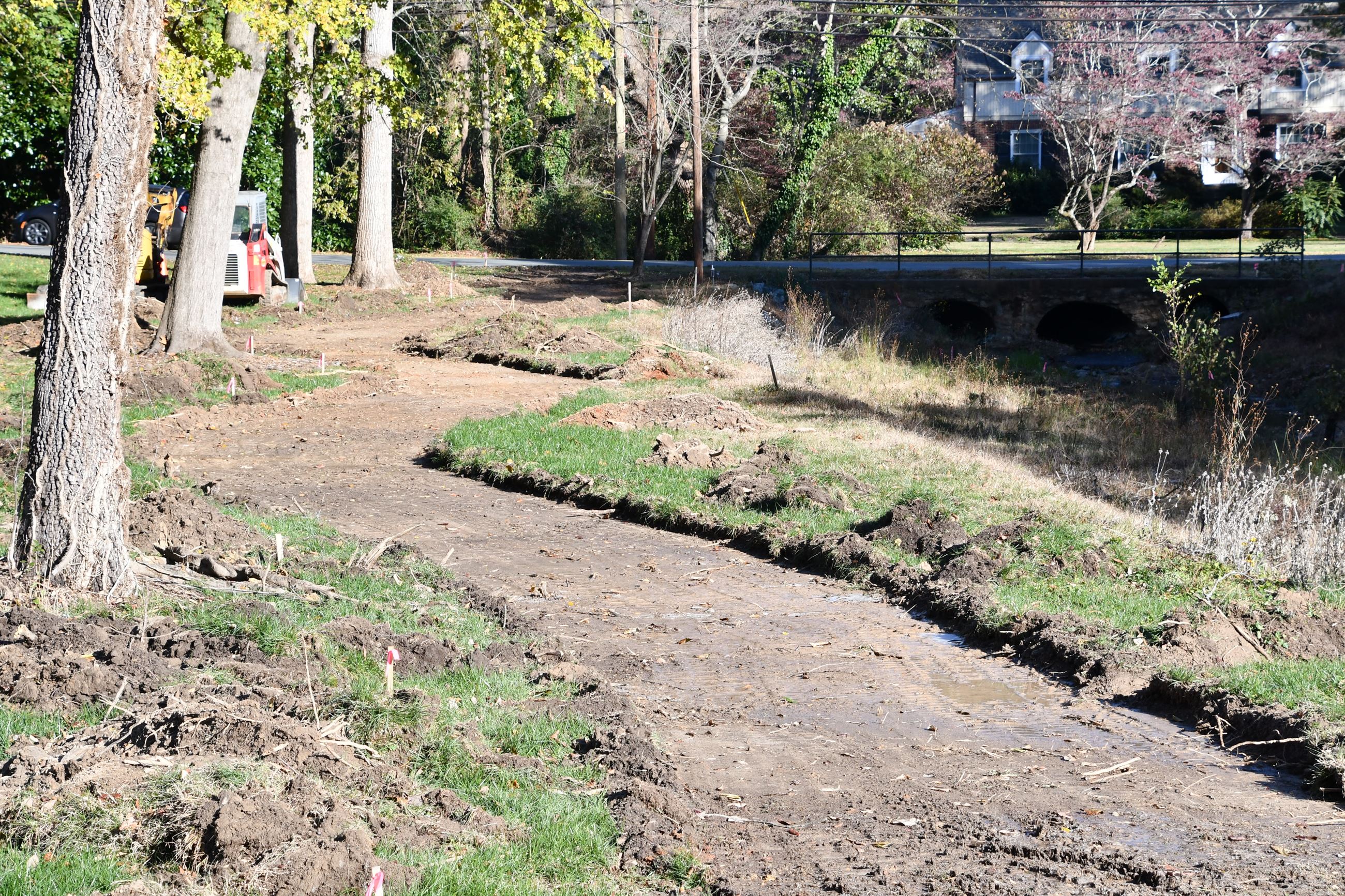 The Arboretum Commons Building with revised design goes out for construction bids in the next few weeks.

The maintenance program for streamside vegetation to assist stream bank stabilization and to suppress invasive plants is ongoing.

In celebration of Arbor Day, The Burlington Women’s Club donated  and planted a Chinese Pistache Tree.

Burlington City Council will hold a Public Hearing at 7PM on Tuesday, April 2 at the Municipal Building at 425 S. Lexington Ave. to solicit feedback regarding a proposed change in scope of the Arboretum Commons Building at the Arboretum at Willowbrook Park. Due to the rising cost of construction, it is necessary to reduce the scope of the facility from restrooms and a multipurpose room, to restrooms and an open air pavilion in order to meet budget constraints. The City Council invites neighbors, community members, and interested parties to speak to the scope change during this public hearing. To view the planned revision to the Arboretum Commons Building click here.

Three hundred trees were planted along the creek as part of the streambank restoration.

Beginning as soon as the week of May 2 the public will begin to see equipment and activity in the park as Carolina Environmental Contracting, Inc. begins to prepare the project site, perform field surveying, and install erosion and sedimentation control measures.Following the site preparation tree cutting, clearing of work area, grading and streambank restoration measures will begin.

City Council approved a contract with Carolina Environmental Contracting for stream bank restoration of Brown Branch (a.k.a. Willowbrook Creek). Construction work is anticipated to begin in early April. Stay tuned for timelines and construction updates as they become available.

The existing playground and swings at Willowbrook will be removed during the week of March 5, 2018.

Preparations for the Arboretum project have begun. At the January 16, 2018 City Council meeting, a contract was awarded to Breece Enterprises to remove and replace a portion of the sanitary sewer that runs through Willowbrook Park. This sewer replacement will help prepare the site for the arboretum project. The sewer replacement is expected to be completed by mid-March, weather permitting.

The first phase of the Willowbrook Arboretum project was a stream restoration. Watch the videos below to learn more about why this process was necessary and what it entailed.

WILLOWBROOK IN THE NEWS